“Unique” has always described Tank--from the moment he joined Patriot Service Dogs as a ball of black and brown fluff, to his goofball personality during training, and now, to his final placement. Tank, PSD’s only Bernese Mountain Dog, is not going to be matched as a service dog for a wounded veteran, but he has found his calling in life and is still doing important work (even if he doesn’t realize it). Our Bernie Boy is now the Agency Comfort Dog for the Nassau County Sheriff! 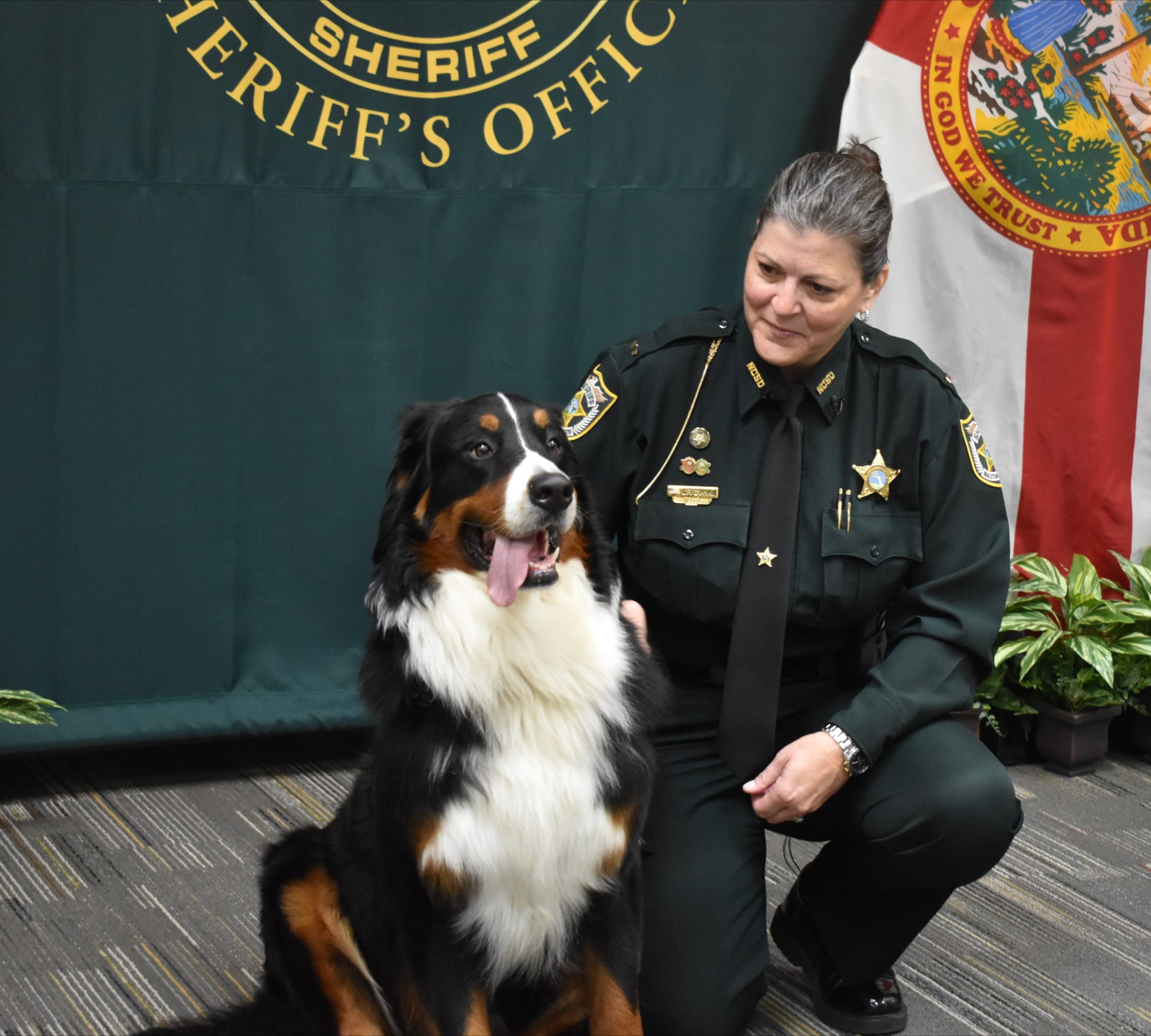 Finding A Place For Tank:

While most Patriot Service Dogs are Golden Retrievers or Labrador Retrievers, the organization is always looking for other breeds that might work well as service dogs. So, when Petland of Largo generously offered to donate an eight-week-old Bernese Mountain Dog, PSD jumped at the opportunity to try something new! Sponsored by Villagers for Veterans, that puppy turned out to be Tank and he immediately stole the hearts of the PSD Board, inmate-trainers, and weekend raisers. His handsome locks and joyful personality made him hard to resist.

As his training progressed, Tank did well with everything except retrieving--he never pretended to be a Lab or a Golden. He could still open cabinets, turn on lights, and hit all of his positions like a pro. But, when it came time to look for a wounded veteran to place Tank with, some of his Bernese traits made it difficult to find the right match. First, he is big--bigger than our biggest male Labs. Second, his Bernese fur is designed to keep him warm in the Swiss Alps, where the breed originated--not for a Florida summer. Third, he draws a lot of attention and loves it all. So, the PSD team began to search for a veteran who liked all eyes on them and could handle and accommodate a very large dog who needed to be in air-conditioning most of the day. After almost a year, the perfect person hadn’t surfaced, until Lieutenant Graham called Patriot Service Dogs’ CEO, Julie Sanderson. 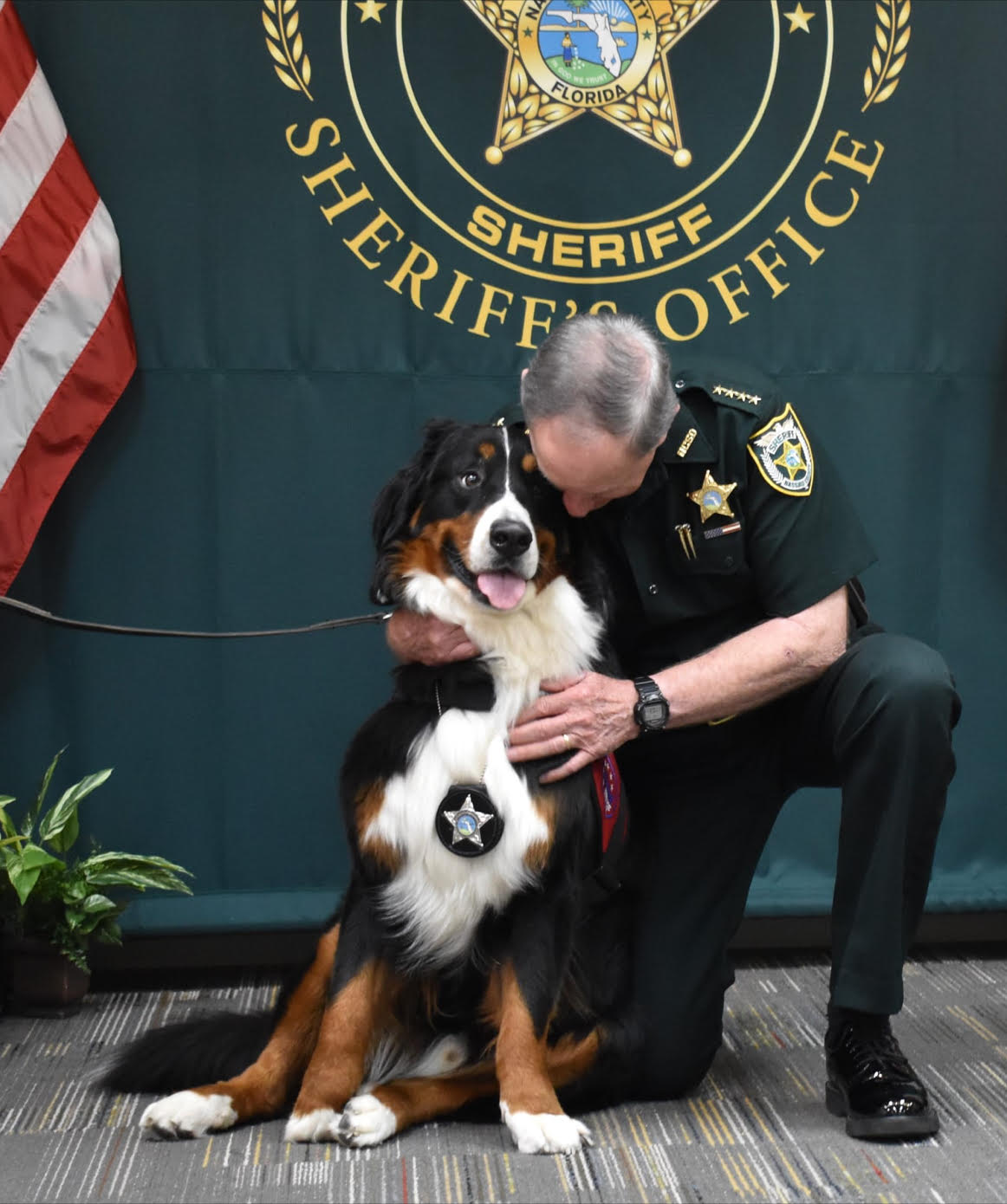 The Position Tank Was Made For:

Lt. Graham is the Lieutenant of Special Operations for Nassau County Sheriff in North Florida and she was on the search for a comfort dog to work with the sheriff’s office. In an interview with PSD, Lt. Graham said that, “Sheriff offices across the country are recognizing the importance of mental health and the role that dogs can play.” Sheriff Bill Leeper wanted a dog to help his officers and employees manage the stress of working in law enforcement and a dog that could help the agency connect with the public. Lt. Graham asked Julie if PSD knew of a dog that might fit the bill. A well-trained, personable, good-looking dog that might not be able to match with a veteran? One dog came to Julie’s mind.

Julie and Lt. Graham set up an initial meeting and as the Lieutenant said, “When you know, you know.”

Because Tank’s position with Nassau County is different from any placement PSD has made in the past, Julie and Lt. Graham worked together to develop the perfect advanced training for him. Lt. Graham and her wife, Captain Crews, an officer at the Nassau County Jail where Tank would also be working, came into our prison program at Lowell Correctional Facility for an in-depth class on service dog commands with our inmate-trainers. Then, Julie went to Nassau County to help introduce Tank to his new professional life with the sheriff and home life with Graham and Crews and their cats. Lt. Graham compared it to bringing home a new baby, “but for such a big dog, he is so gentle. He has fit in really well.”

At work, Tank stayed close to Graham or Crews for his first few weeks on the job, but he quickly gained confidence. “Now he is catching on that he can go run around and visit, especially in the morning when we first get to work. He lays in the hallway and people have to pet him to get by. As soon as they see him, they begin smiling. Having Tank here brings a smile to people’s faces,” Graham said. Tank has even developed a special attachment to the narcotics detectives after spending an afternoon with them. 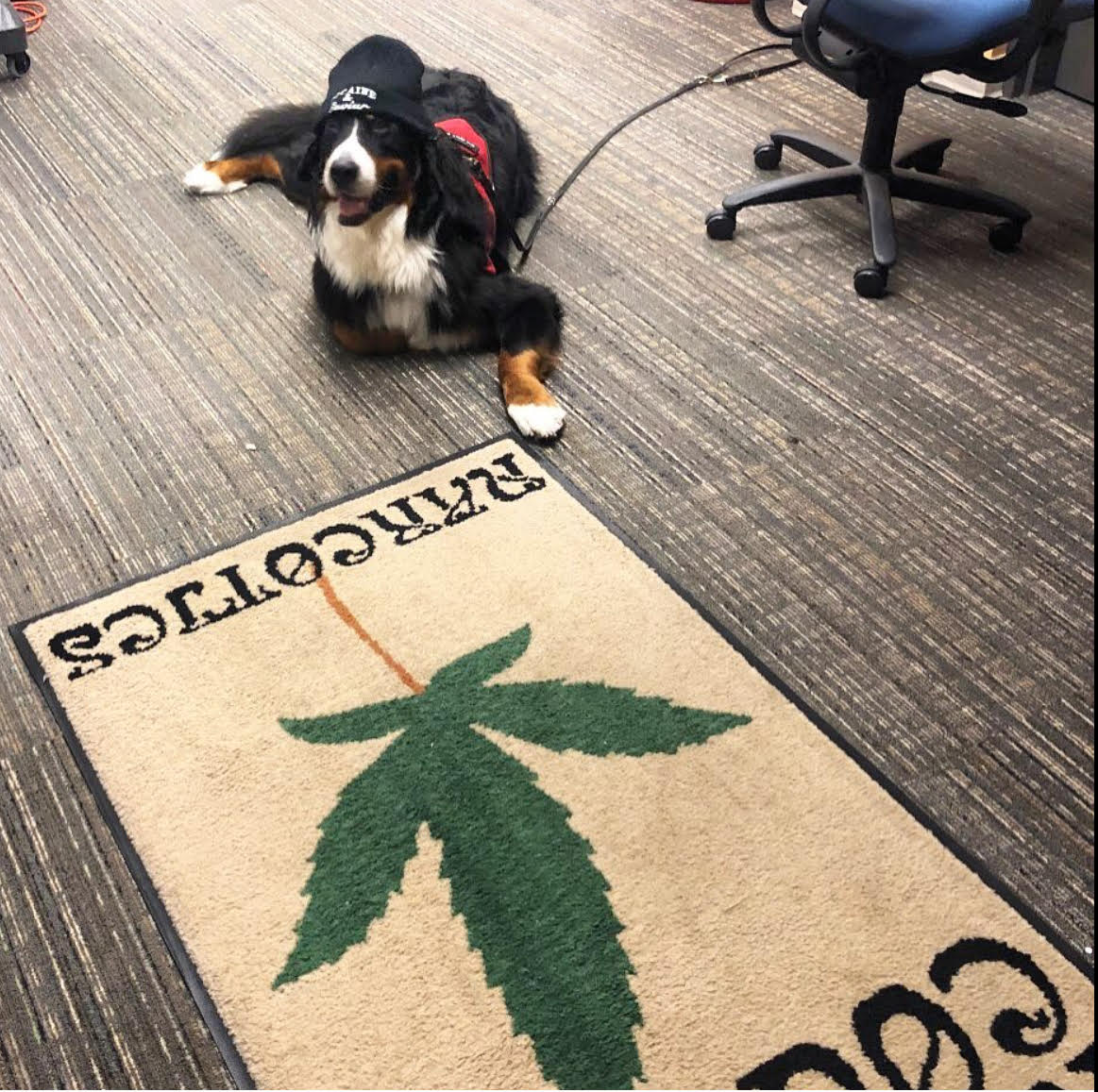 Tank’s Future With the Sheriff:

Lt. Graham is continuing Tank’s training for his role at the Sheriff's Office. She is slowly introducing him to more young children, something he didn’t see a lot of training in prison. She is also helping him feel more comfortable working in crowds; his service dog training taught him to stay focused on one person, so now, he is learning that while Lt. Graham is his person, he can approach the community.

Tank and Lt. Graham tried out both of these new skills at once on the county’s first day of school! Tank and Graham spent the morning at an elementary school, greeting children at the crosswalk as they began their day. Later, they visited a 6th grade class to help the students feel more comfortable entering middle school. We all remember how nerve racking the first day of school can be, but Lt. Graham said Tank did great with the kids. Hopefully he kicked off their school years with a smile!

Not every dog wants to be a service dog for a wounded veteran. In every class of PSD dogs, some get released because they have medical situations that don’t make placement possible or because their personalities aren't suited to the job. We always try to respect the dogs and find the best future for them, even if it isn’t the one we imagined. With Tank, we could have never imagined that he would join the sheriff’s office, but somehow the fates aligned for him and he has found the perfect future for himself. At PSD, we are so proud of the work he is doing to comfort our law enforcement officers and the community of Nassau County. We look forward to keeping up with Lt. Graham and Tank on all of their adventures! 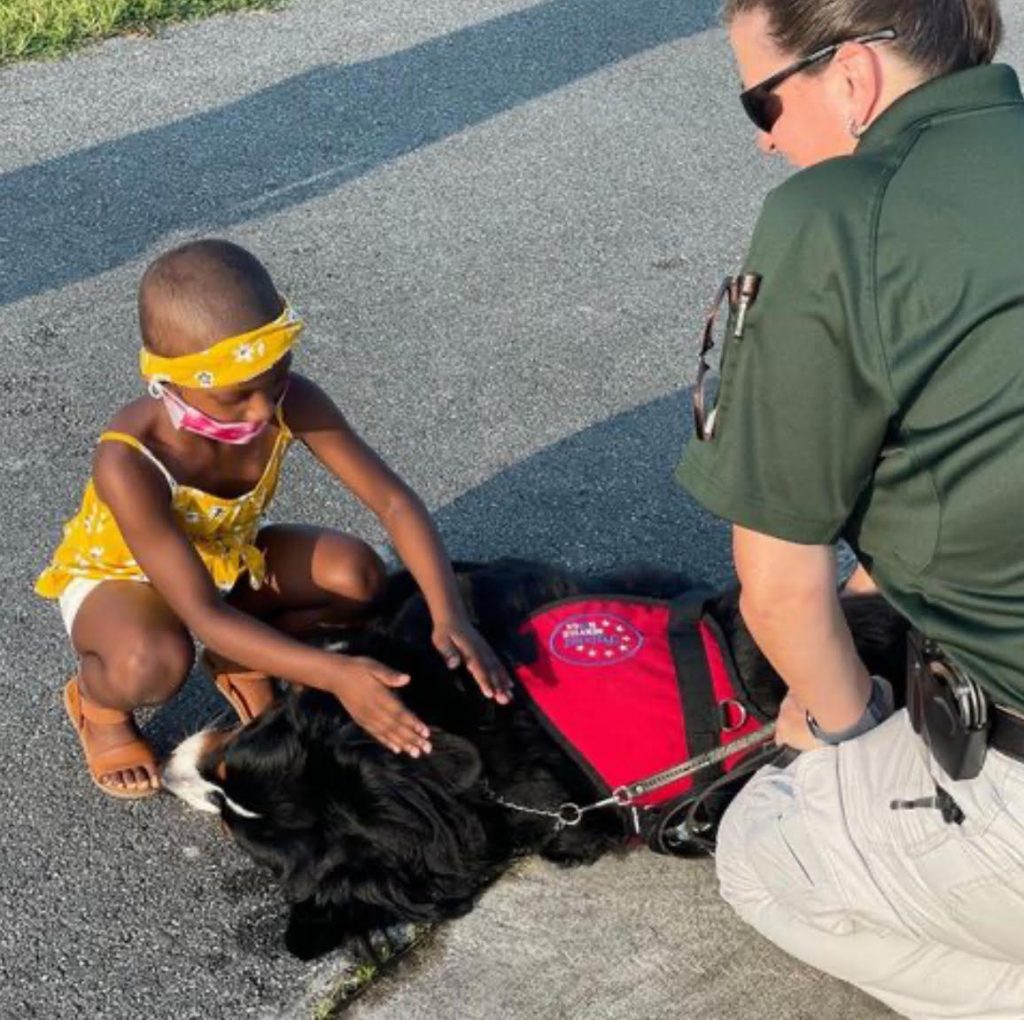 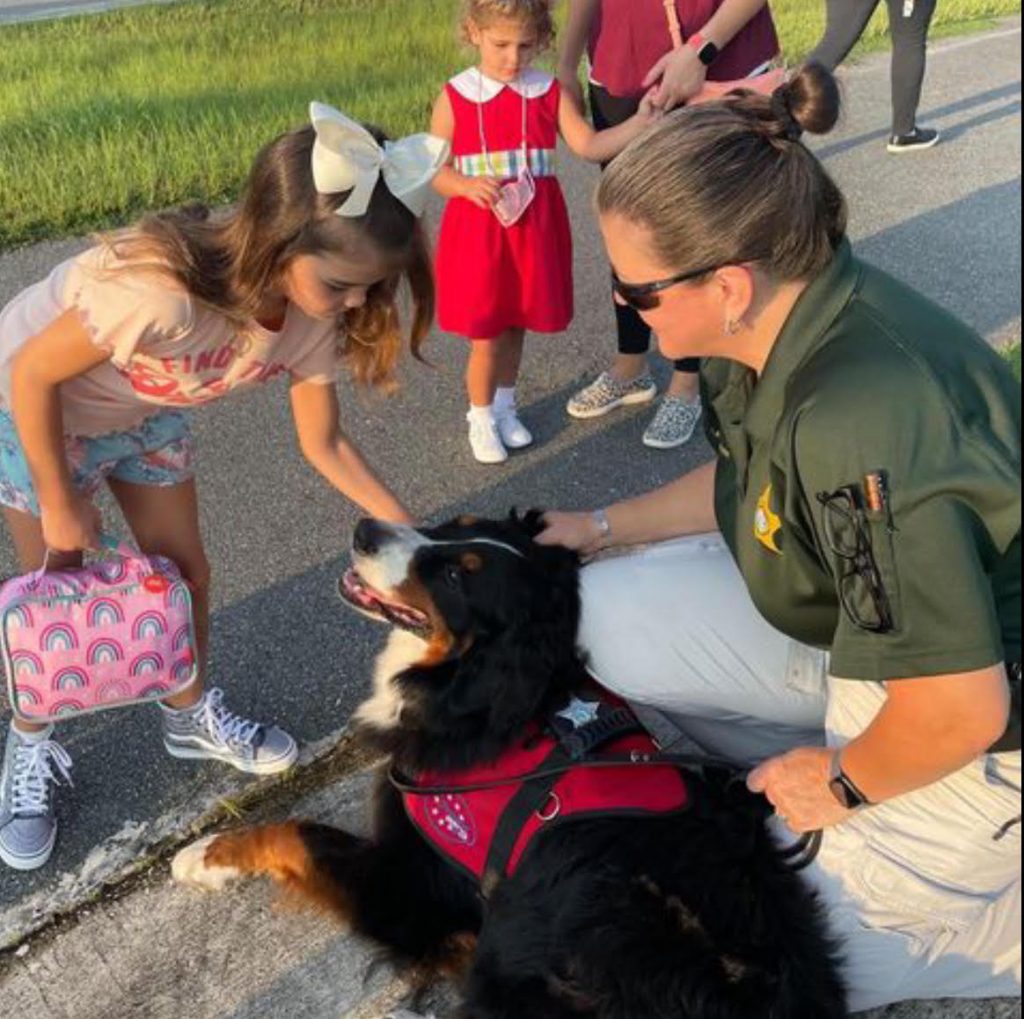 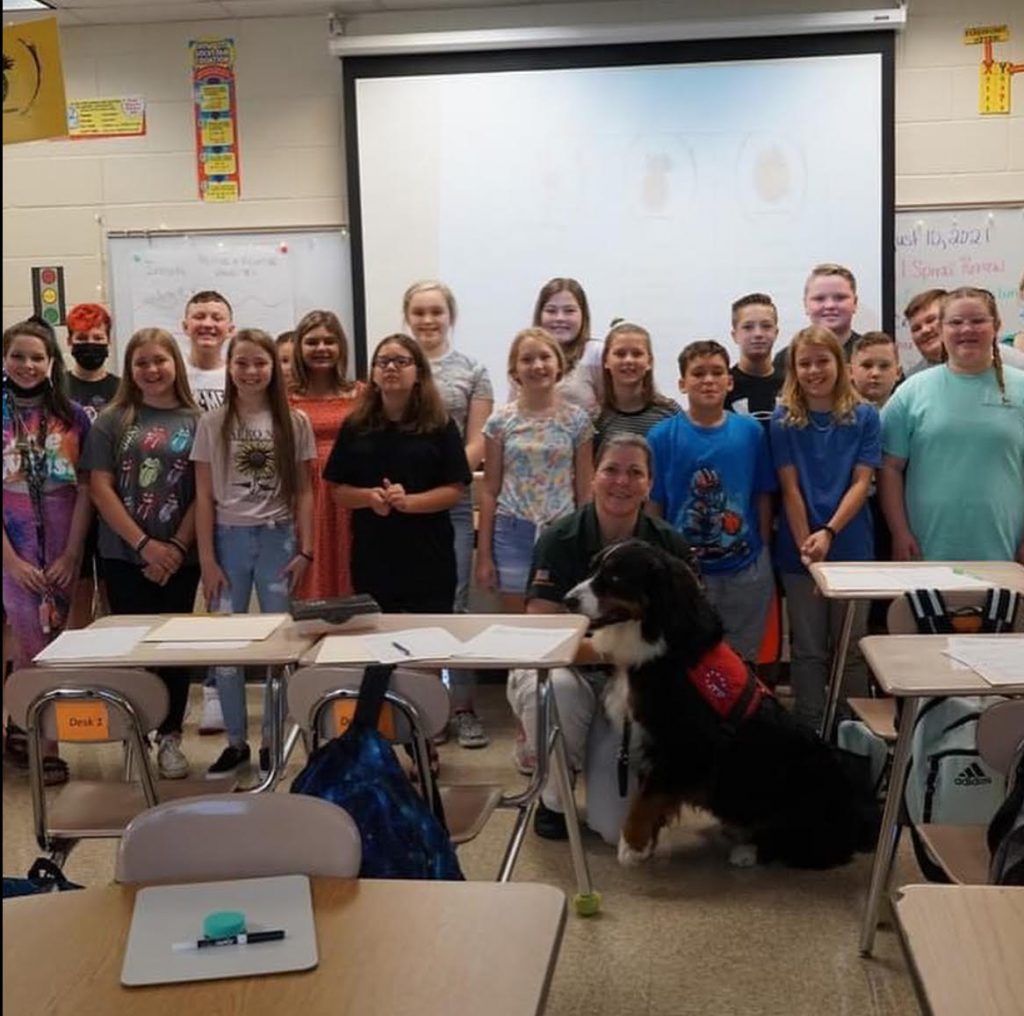 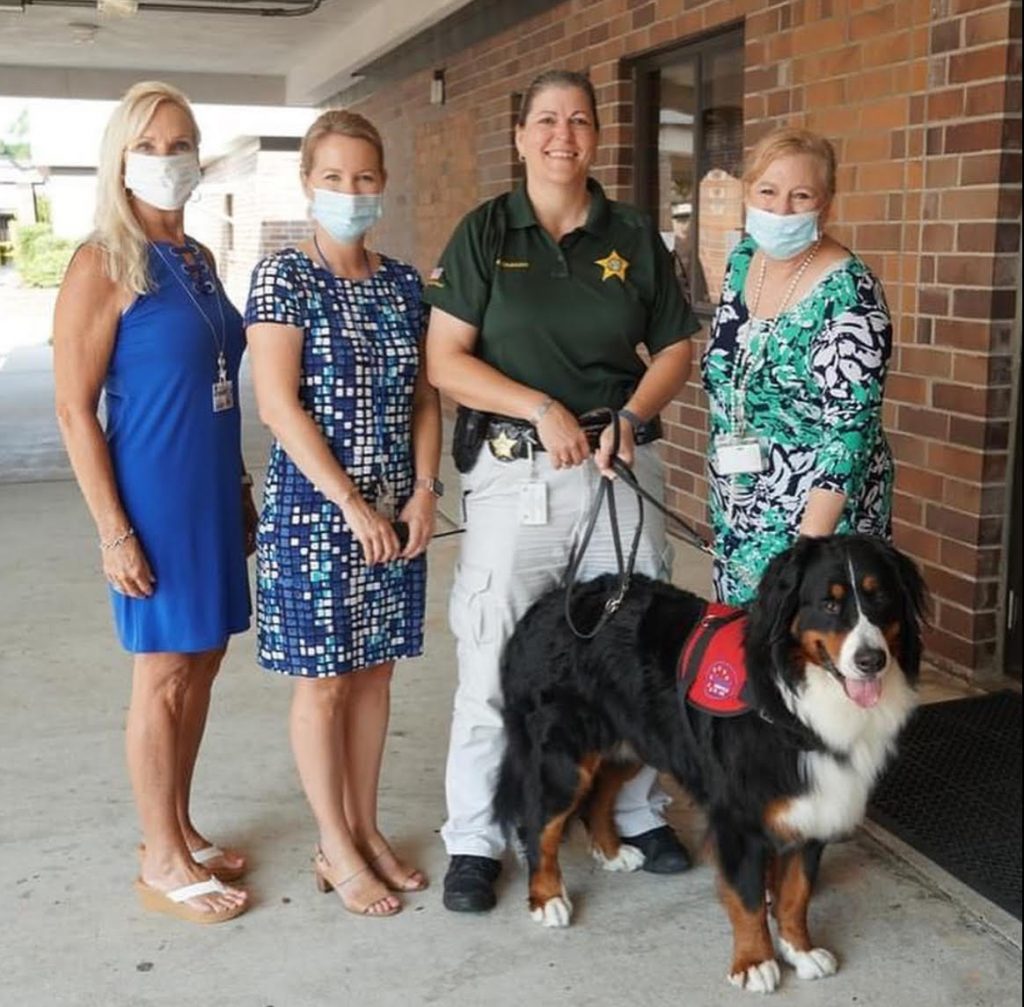